Step back in time by visiting these ships

The first ship in the Navy to be named for more than one person, The Sullivans is a Fletcher class destroyer that was launched in 1943. The ship saw significant action in the Pacific theater, downing eight Japanese planes, participating in the bombardments of Iwo Jima and Okinawa, and rescuing pilots and crew from burning or sinking vessels. The Sullivans later served in the Korean War and the Cuban Missile Crisis.

Little Rock is the only surviving vessel from the Cleveland class of light cruisers that served during World War II. The ship was launched in 1945, but didn’t see action before the war ended and went on to serve as flagship for the Second and Sixth fleets, patrolling the Atlantic and Mediterranean. Little Rock boasts an admiral’s quarters. The ship is the only guided missile cruiser on display in the world.

One of 77 Gato class submarines, Croaker was launched in 1944 and went on six wartime patrols in the Pacific. The submarine sank 11 Japanese ships. Croaker wasn’t left in its World War II configuration and was converted to a hunter-killer submarine with additional sonar, radar and quieting capabilities for service during the Cold War.

NOTE: A hull breach on The Sullivans in April caused the ship to take on water. All three ships at the Buffalo and Erie County Naval & Military Park were temporarily closed as crews addressed the problem. Check first before visiting. 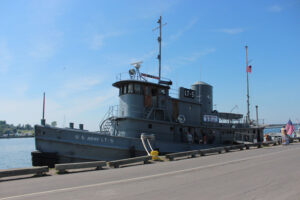 Launched in 1943, LT-5 was one of the oceangoing tugboats built for Operation Overlord, the invasion of Europe. The ship steamed for England in early 1944, towing two barges carrying railcars as part of the invasion buildup. On D-Day LT-5 joined a fleet of tugs, barges and merchant ships with the mission of creating artificial harbors to maintain a steady flow of men and supplies to the front. While operating off the coast of Normandy on June 9, the tug shot down a German plane. LT-5 towed barges and landing craft to the artificial harbor off Omaha Beach and continued to serve in England. After the war it was assigned to the Army Corps of Engineers, operating on the Great Lakes and helping with harbor maintenance and construction projects, including the St. Lawrence Seaway in the 1950s. 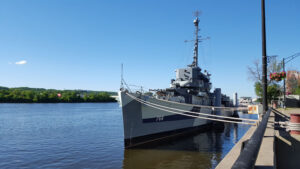 The destroyer escort was developed to address a severe shortage of anti-submarine vessels at the start of World War II. Designed to be maneuverable, fast and quick to build, this new type of ship combined heavy anti-submarine and anti-aircraft weapons with the latest electronic equipment for detecting enemy ships to help it protect supply ship convoys. From late 1944 through 1945 Slater protected conveys crossing the Atlantic. After the war in Europe ended Slater was assigned to further convoy duty in the Pacific. Following the war, it was deactivated until being transferred to the Greek navy where it served for three decades. Of more than 500 similar ships constructed the Slater is one of fewer than a dozen surviving destroyer escorts and the only one still in its World War II configuration. 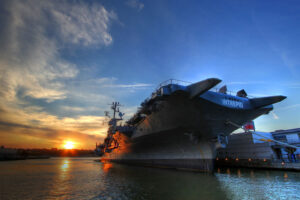 Launched in 1943, the aircraft carrier Intrepid became famous for its World War II service, participating in many of the great battles in the Pacific and surviving five kamikaze attacks and a torpedo strike. The ship continued serving the Navy during the Cold War and the Vietnam War. Intrepid also served as a recovery vessel for several spacecraft during the 1960s. The Intrepid is berthed on the Hudson River as part of the Intrepid Sea, Air & Space Museum. The space shuttle Enterprise is on display along with 28 restored aircraft and the only diesel-powered strategic missile submarine open to the public.